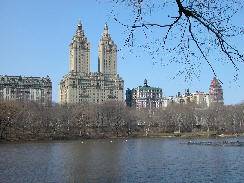 In New York City, everything is at your fingertips; social, cultural, educational, historic, sportive, culinary, artistic, theatrical, cinematic, musical activities. Densely packed with a multicultural population, the city vibrates with high energy and has something to amuse and invigorate everyone No wonder it is nick named “The City that Never Sleeps”.

NYC is comprised of five boroughs each with its own distinct flavor. Within the boroughs, the city is further divided into different neighborhoods that are as intimate and distinctive as any small town in the United States. Against the backdrop of gravity defying skyscrapers there is a mixture of cooperatives, condominium, apartments and private homes known as townhouses or brownstones.

The legendary Central Park is one of the most recognized icons of the city. Owning a residence on or adjacent to the Park is reserved for the privileged few who insist on the best of the best.

The preeminent area in Manhattan is the Upper East Side in the Sixties and Seventies on or near Fifth and Park Avenues. Dotted with mansions and Pre-wars it offers world class shopping, major museums, elite schools, pricey restaurants and views of the park.

Across Central Park is the more diverse Upper West Side. Prices range from the high end to the “reasonable”. New lofts and condo projects and charming townhouses are very much in high demand and sell at a steady pace.

SoHo is populated by singles, fashionable couples and empty nesters looking for a downtown vibe. While Fifth Avenue and Madison Avenue cater to an upscale clientele, no neighborhood in New York is an eclectic mix of high and low end, trendy and timeless, vintage and avant-garde quite like SoHo.

Greenwich Village which used to be thought of as a haven for bohemian and creative types has been transformed by gentrification and commercialization.