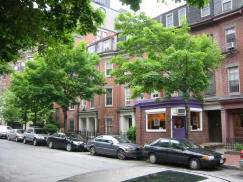 Boston is one of the illustrious cities of the United States, rich with culture, a New England atmosphere and some of the best schools in the world. It is a major financial center, and thanks to its leading universities it stays on the cutting edge of medical research and technological development.

The Bostonian residential areas have something for everybody. Preserved historical buildings are intermingled with newer construction. The Charles River hosts many communal, sport, and artistic activities.

Beantown, as it is affectionately called, is divided into 22 neighborhoods, each with a distinct character. City living is alive and well - along the waterfront - because of its ever-expanding development of restaurants, shopping and hotels. Areas like Allston and Brighton are student communities while others like Brookline and Jamaica Plain are middle-class neighborhoods.

The Back Bay is one of the more upscale and impressive neighborhoods in Boston and even the United States. It has rows of historic homes, an energetic commercial district including the shops and restaurants on Newbury Street, and the two tallest skyscrapers in Boston.

The South End is North America’s largest existing Victorian residential district and underwent a major renovation starting in the early 1980s. The neighborhood is filled with a diverse mix of families, young professionals, and is a thriving artistic and bohemian center with trendy restaurants, coffee shops and Mom and Pop stores.

Boston and its outlining suburbs are awash in enthusiasm for the Red Sox Nation, the Head of the Charles Regatta, the Boston Symphony and Pops, the Boston Museum of Fine Arts, Faneuil Hall and countless other life enriching activities.

Boston is a great historical city in which to live, being, walker-friendly, clean, compact and diverse, full of traditions but also modern in ideas.